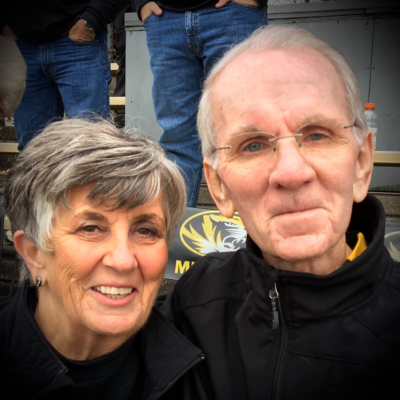 Bill was born in St. Louis on September 18, 1943. He was raised in Brentwood, MO where he graduated from Brentwood High School. He graduated from Southeast Missouri State in 1966. After graduation, Bill joined the Air National Guard where he was a mechanic for the F100 Jets.  He was a very patriotic and proud citizen of the United States of America.

On November 4, 1967, he married his best friend Mary Jane Lewis. Bill and Mary met while they were camp counselors at YMCA Camp Lakewood. They were married for 52 years, and lovingly raised Laura Elizabeth. Bill was a fun, wise and dedicated Dad. Laura and her husband Luke Purewal, gave Bill and Mary three handsome grandsons, Britton, Ethan and Louie. One of Bill’s most beloved activities as Papa was taking the three boys trout fishing at Rockbridge Trout Ranch.

His next love was tailgating and cheering for the Mizzou Tigers on the football field and basketball court, win or lose. Bill was a devoted friend who was there in the best of celebrations and most worrisome of storms. He was an active member on the Lake St. Louis Planning and Zoning Commission, and a faithful member of Dardenne Presbyterian Church. A follower of Jesus, Bill walked in Christian faith throughout his life.

He is preceded in death by his devoted parents, Ray and Florence Fridley, and loving brother in law Hugh Ignatius.

There will be a Celebration of Life service on Tuesday, August 11 at 11:00 a.m. at Dardenne Presbyterian Church, 7400 S. Outer Road 364, Dardenne Prairie, MO 63368. Visitation will begin at 10:00 a.m. As a reminder, masks are required and social distancing is encouraged.

In lieu of flowers, memorial donations may be given to Dardenne Presbyterian Church.

To order memorial trees or send flowers to the family in memory of William R. Fridley, Jr., please visit our flower store.