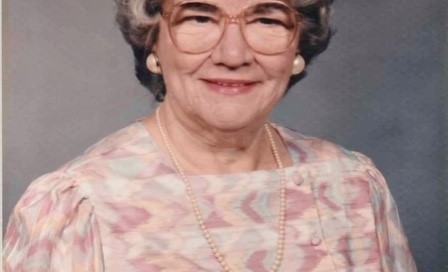 Wanda was born in Shelbyville, KY, to Davis and Lillian (Marlow) Eakins.  She married Ray Taylor on April 23, 1955, and they were married 56 years when he passed in 2011.

Wanda moved to Bethalto in 1963 and quickly set about getting involved with her family in her new hometown.  She worked as secretary to the Village Clerk of Bethalto, then was elected to the position and served several years as Village Clerk in support of her mayor and town before retiring.  Her office at City Hall was a hub of activity where even her children’s friends would stop by to visit with her and catch up.

Wanda was always supportive of the interests of her children and grandchildren, including a faithful attendee of their activities, both sports and musical performances.  She enjoyed bowling, with a distinctive pause and hip shake in her approach that has been oft imitated by the family over the years.  Later in life she picked up the game of golf and “competed” in leagues with her friends.  She was a St Louis Cardinals fan, and her first home opener attendance in 2011 was likely the reason the Cardinals won the World Series that year.

Wanda was an avid reader and supporter of the Bethalto Public Library.  Upon moving to Bethalto, she joined the Women’s Club and played a big part in the growth of the library, including time spent as a volunteer librarian.  When storm warnings would come out and others rushed to get milk, bread, and eggs, Wanda would hurry to the library to make sure she had plenty of books to hold her over.  She usually had at least one book in her purse “just in case”, surrounded by the ever-present wads of Kleenex.  Her love of reading is high on the list of things she passed along to her family.

Wanda is survived by two daughters, Gayle (John) Leonard, and Laura Taylor (Mark Hubbard), both of St Charles, MO.  Both daughters consider the thought of turning into their mother their highest compliment and goal.  Wanda adored her three grandchildren: Elizabeth (Chris) Burkart, Andrew Leonard, and Alan Taylor, and made sure they always had pajamas.  And her dear sister and childhood partner in crime, Dorothy (Roy) Baker.

She was preceded in death by her parents, her brother Paul (Sonny) Eakins, her husband Ray, and her son Philip Taylor.

Due to the current pandemic precautions, there will be no services.  Later in the year, she’ll be returned to Kentucky where her ashes will be scattered to mix with her son’s.

In lieu of flowers, memorial donations may be given to the Bethalto Public Library in support of Wanda’s love of books, mailed to 321 S. Prairie St., Bethalto, IL 62010 or online donation through their website at: https://magic.collectorsolutions.com/magic-ui/en-US/Pay/Process/CartInformation.
To order memorial trees or send flowers to the family in memory of Wanda Taylor, please visit our flower store.