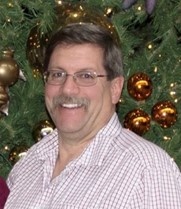 Virgil was born in St. Louis, MO to the late Frank Heinle and Thelma Heinle (nee: Lewis) and graduated from Ritenour High School (Class of 1980). Virgil worked for Gulfstream Corporation (a General Dynamics Co.) He was skilled in all aspects of Jet Mechanic and Inspector’s Authorization. He was also the President of SLAMA (St. Louis Area Maintenance Association). He took much pride in being in charge of their annual Convention and doing their award ceremonies. His co-workers said that he was a jack of all trades and a true problem solver.

Virgil was married to Denise Heinle (nee: Littefield) on August 8, 1993 they were married 26 years.

Followed by a Celebration of Life at the park. Food and refreshments will be served following the Service from the indoor facility. Please come with your favorite story of Virgil and plan to hang out at the oversized fire pit outside. The family of Virgil Heinle held off on his Celebration of Life due to Social Distancing issues.

In lieu of flowers memorial donations may be given to the Leukemia and Lymphoma Society.
To order memorial trees or send flowers to the family in memory of Virgil Heinle, please visit our flower store.