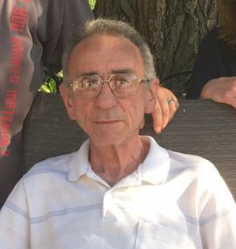 Tom was born to parents Vincent and Rosalie (De Manuele) Fonte on August 25, 1946 in St. Louis, MO. He grew up the oldest of 5 kids. In 1967, he enlisted during the Vietnam conflict, stationed at the U.S. Naval Air Facility in Naples, Italy as a Navy PCSN, and serving his country honorably until his discharge in 1970.

Tom married Donna Lincoln, February 13, 1971 and the couple had two children. Tom worked for General Motors Assembly Plant in St. Louis and in Wentzville, and was a proud UAW member. He retired January 1, 2007.

Tom is preceded in death by his wife, Donna and daughter-in-law, Jennifer.

In lieu of flowers, memorial donations may be given to the American Heart Association, the American Diabetic Association, or to Navy-Marine Corps Relief Society. The family of Thomas Fonte wishes to thank the incredible staff at SSM Hospice.


To order memorial trees or send flowers to the family in memory of Thomas V. Fonte, please visit our flower store.