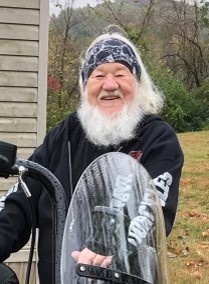 Stanley Wayne Cowin, 75, of Imperial, Missouri, went to be with his Lord and Savior on June 28, 2021, surrounded by family at home.

He was born in Ironton, Missouri, on February 20, 1946, and graduated from Southern Reynolds High School R2 in Ellington, Missouri. He served in the US Navy and received an honorable discharge in 1967.

Stanley served several churches throughout his lifetime, including Ellington First Baptist church in Ellington and Licking First Baptist in Licking, Missouri. He attended Bethel Baptist Church in Imperial Missouri until his passing.

He was avid Harley Davidson rider, and was in a number of motorcycle clubs, Christian and otherwise. He attended the Sturgis Motorcycle Rally a number of times, and a multitude of other smaller biker rallies.

He was preceded in death by his parents, Stanley and Wanda Cowin, a brother, Larry Cowin, and his wife Anna Cowin.

A Celebration of his life will be held in the coming weeks.

In lieu of flowers, memorial donations can be given to any one of number of wonderful veteran’s charities.
To order memorial trees or send flowers to the family in memory of Stanley Wayne Cowin, please visit our flower store.