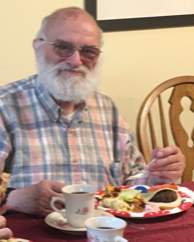 Robert was married to Barbara Anne (nee: Dohm). on June 8, 1957. They would have been married 65 years this year. He was always proud to say that he knew when he saw her that she was “the one” for him.

Bob was always a hardworking man. His first job was delivery newspapers before and after school at the age of 8. He worked at Froesel-Telle tire for many years: from a young boy, teenager and in adulthood. He fostered his love of cars there. His beloved “Butilack” and his Silver Cloud. He worked at Community Tire as a young boy and man as well. He was always proud to explain the process of recapping a tire and making white walls. He felt that people should take pride in their vehicles and keep their tires clean and waxed. He managed a Cold Storage Plant in Terre Haute, Indiana for 7 years and then moved back to St. Louis to work at Dohm & Nelke, Incorporated (Meat Packing Equipment Manufacturing Plant) as the Purchasing agent. For many years he worked two jobs to make sure that his family had everything that he felt they needed. In 1984, Bob and Barbara bought the company, changing the name to Tri-Power Machine. Bob acted as President for many years. He loved every aspect of the business. He lived his last year + with his youngest daughter (Elizabeth “Lizzie”) and son in law: Bob who graciously gave him a loving and happy home.

Bob was very outgoing and friendly. He never met a stranger. He wanted everyone to feel included and important. He had a big laugh that was infectious. When he laughed, you couldn’t help but join in. He loved to dance and so did Mom. They were a hit at parties and receptions. They would be out on the floor dancing and having a good time all night. He was very active in the Cub scouts and Boy Scouts as his boys were growing up. He was Den Leader and Pack Leader and Scoutmaster of BSA Troop 887. They were volunteer positions he worked hard at and was very proud of. He had many escapades to share from meetings and on camping trips and hikes. In the early 2000’s to it’s closing, Robert was the store Santa Claus for Nagle’s in Florissant. He looked forward to it every year as did many of the children in the neighborhood. One year, he hadn’t seen one of the children he remembered. The mother brought him their letter for Santa Claus as the child had been sick and was unable to attend. Hence his nickname from his grandchildren and great-grandchildren “HoHo Pop”. It was a “job” he dearly loved. His signature activity was offering people cough drops (Halls mentholyptus) to those that might cough followed by the words: “You need to keep a few of these in your pocket. You never know when you’ll need them”. He always had a handful in his shirt pocket.

A Memorial Service for the family will be held. Date TBD.

In lieu of flowers, the family would ask that donations be made to the Wounded Warrior Project; an organization that was dear to Robert. The family would like to thank the doctors and staff of Mercy Hospital Jefferson for the wonderful care and support during his final day(s).

To order memorial trees or send flowers to the family in memory of Robert C. Baldas, Sr., please visit our flower store.