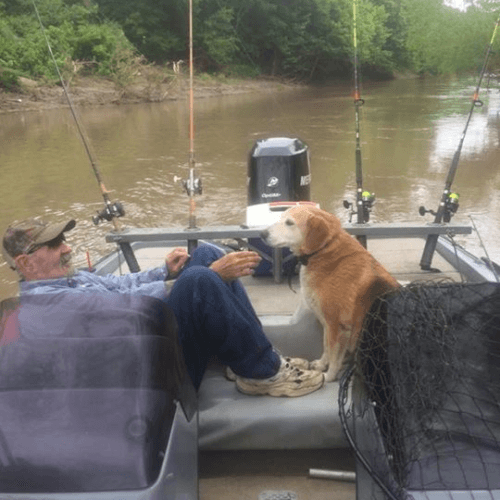 Randy was born in St. Louis, MO on March 18, 1952 and passed away in his home on October 9, 2017. He was the son of Joseph and Laura Sutter (Kreitner). Randy was preceded in death by his parents, grandparents, two brothers in law, Richard Savkovich, and Kirk Kozma, and one nephew, Matthew Seymore, and many aunts, uncles, and cousins. He is survived by his three sisters, Susan Savkovich of Troy, MO, Linda Callaway and husband, George of Winfield, Ginnie Kozma of Winfield, and his nieces and nephews.

After serving in the U S Army, he worked for, and retired from the Hazlewood School District as a glazier. Randy was an avid fisherman all of his adult life. There was nothing he loved more than being out on the rivers and lakes in his boat with his dog, Chance, and his very good friend, Chris Randall. Randy had many fishing buddies over the years. I should also mention the dog he had before Chance, named Brunt. These dogs were like family to him, and he never went anywhere without them.

Our brother will be so missed by us, and all who had the pleasure of knowing him. My family is thankful that Randy got to see so many of you and the family reunion in Lake St. Louis this past summer.

In lieu of flowers donations could be made to national suicide prevention or Alzheimer's association.
To order memorial trees or send flowers to the family in memory of Randy Sutter, please visit our flower store.