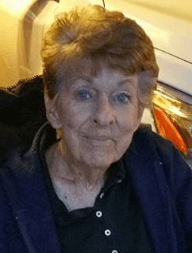 Karan passed away at Pacific Care Center under Hospice care on April 12th. She had just celebrated her 80th birthday in October 2018 and was surrounded by her friends and family for an afternoon of celebration.
She was born in Wadena, Minnesota and moved to North Dakota in 1969 where she lived until moving to the Twin Cities in 1980. After just a few short years in Minnesota, Jerry and Karan moved to Louisiana to be closer to her daughters and grandchildren.
The majority of Karan’s career was spent working for Bell Telephone and just before retiring, she worked as a contractor for the Post Telephone company at Fort Polk in Louisiana.
Upon retiring in 2010 Karan enjoyed gardening and several social games on Facebook.
After her husband’s death in 2012 she moved back to North Dakota to be closer to her oldest daughter Kim, then later moved to the Saint Louis area to be closer to her daughters Sheri and Shelly.
Karan will be missed by her daughters Kim, Sheri and Shelly as well as her 10 grandchildren Ralph Sampsill Jr, Corey Moszer, Jeremy Sampsill, Amber Blady (Gavin), Christopher Moszer, Kayla Lercher (Alex), Courtney Schwent (Loren), Ashley Gefroh, and Michael Sampsill (Haley).
Karan always enjoyed visits from her 11 great grandchildren Abigail Blady, Kaylee Sampsill, Nathan Blady, Zoe Moszer, Jeremy Sampsill Jr, Lucas Blady, Coen Moszer, Silas Lercher, Elise Moszer, Frances Moszer, and Lydia Schwent.
She was a beloved sister to Marlys Key and Marlowe Marsh and an aunt to two nieces.
Karan was predeceased by her husband Jerry Mahlen and her parents. Karan wished to be cremated and not to have a memorial service. The family will have a celebration of life on April 21, 2019 at the home of her daughter in Arnold, MO. The family would like to request that you please perform a random act of kindness or consider a memorial contribution to www.volunteer.va.gov/apps/volunteerNow