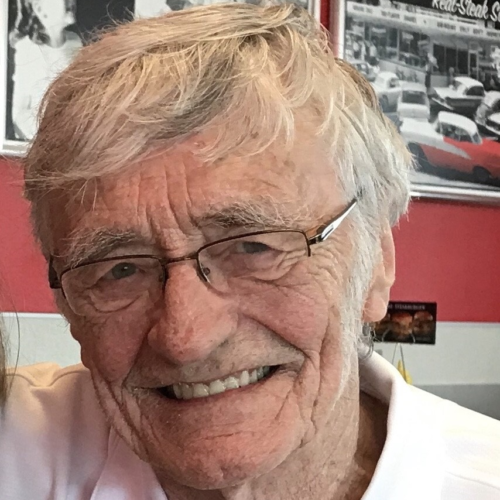 September 28th saw the transition of John Mackey from this world to his next adventure. He departed from home, three months shy of his 90th birthday, for which he wanted a tattoo, surrounded by family and friends.   A pioneer in the development of flight simulation, he was also expert in advanced mathematics, physics, philosophy, classical music and in creating the worst jokes imaginable. His kindness, compassion and insatiable curiosity were limitless. Many credit him with their passing grades in required statistics and other math related coursework.

Born in Salford, England 12-23-1930 to modest circumstances, his life was the actualization of the American Dream. Wanting opportunity for himself and his children, he moved to the States and after one year settled, in St. Charles, MO, where he worked at McDonnell Douglas, culminating his distinguished career there as an inaugural recipient of the prestigious Fellow Award for his contributions to the aerospace industry. Accomplishments he considered equally important were “Outstanding Volunteer Service” to Kinloch’s Holy Angel’s Church and 2nd place in the SCCA southern Illinois A Stock Autocross.

On Sunday, October 11th, from 2-5, friends and family will gather, with social distance and required masks to tell stories and bad jokes in the garden at 21 Princeton Ave, 63130. In lieu of flowers, please donate to a local food bank and commit random acts of kindness.
To order memorial trees or send flowers to the family in memory of John Mackey, please visit our flower store.