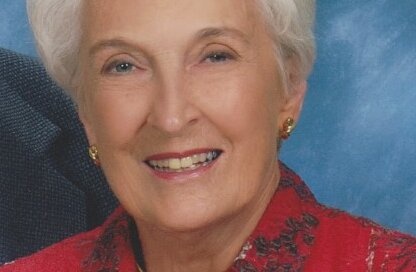 Jo raised three children while working as a secretary at the United Methodist and Presbyterian churches and then retired after 22 years as a secretary at the Missouri School for the Deaf. She was very active with her children during their scouting years and was influential in activities at the Court Street United Methodist Church. After Jim passed, Jo volunteered at the Churchill Memorial, was a member of the American Red Cross board, and the Westminster and William Woods Collages Board of Associates. After moving to St. Charles Jo remained active in P.E.O. and joined Teammates, an active women’s group. Jo was an excellent seamstress, an award-winning water color artist and an excellent cook who was never afraid to try new recipes on her family and friends. She enjoyed dancing, playing bridge, and travel.

She is lovingly remembered by her children Pam (John) Lindstrom of Sedalia, Denny (Marci) Potter of Madeira Beach, Florida, and Karen (Bruce) Pickett of Warrensburg. She was loved and adored by her eight grandchildren who have blessed her with 13 great-grandchildren.

Memorial donations can be made in the form of a check and can be sent to Cremation Society of Missouri, 2338 Highway 94 South Outer Rd., St. Charles MO 63301: All donations will be shared with the following organizations P.E.O. Chapter LR, First St. Charles United Methodist Church, 63301 or SSM Health at Home Hospice.
To order memorial trees or send flowers to the family in memory of JoAnn Worful, please visit our flower store.