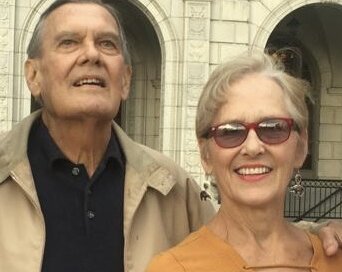 James Christopher McCurdy, always known as Chris, was born in Quincy Illinois, first child of Bonnie Bayless McCurdy (from Mountain Grove, MO) and Leo Edward McCurdy (from Douds, Iowa). He was preceded in death by his sister Karen and his brother Clay while his sister Nan, a United Methodist Missionary in Nicaragua and Mexico, is very sad that her big brother is gone. He grew up in Jacksonville, IL, graduated from Jacksonville high school and MacMurray College. He then received a double masters in English Literature and theology from Western Kentucky State, Bowling Green.

He loved his work with an import/export company in Belgium, Great Britain and Germany for four years; after his father died, returned to St. Louis to help his mother with his teenage brother, Clay. He worked in St. Louis for Mercantile Bank, then for Goldman Sacs and Drexel Bernham until the crash of 1987 when more than 5,000 banking employees were let go just in New York. He worked at many jobs back in St. Louis and eventually very much enjoyed working in education until the crash of 2007-2008.

Chris, along with his family were Presbyterians in Jacksonville, then members of a United Church of Christ in Chesterfield MO. Chris became Anglican in his 20’s and Lutheran in his late 30’s. This is when he attended many Bible studies, both Lutheran and Catholic and began as a volunteer with St. Vincent de Paul, which he loved until his death.

He was extremely happy to finally become Catholic and found a spiritual home and community at his Parish of St. Anselm in St. Louis County, especially the Monks.

He taught theology and the Bible with his church and other groups and this was probably his favorite pastime – reading the Bible, theological books and preparing for his classes.

Chris also volunteered with St. Luke’s Hospital as a Lay Eucharistic Minister, giving Communion to patients, families and staff. He enjoyed visiting the patients, and he adored blessing new babies.  This work was very fulfilling for him.

As a young man Chris played piano, guitar and sang, and his love of music, especially classical music continued throughout his life. He was also reading, rarely watched TV – did not have cable or internet, spent much time at the library and loved cats.

He loved God and had a very strong faith, witnessing frequently to family members and friends.