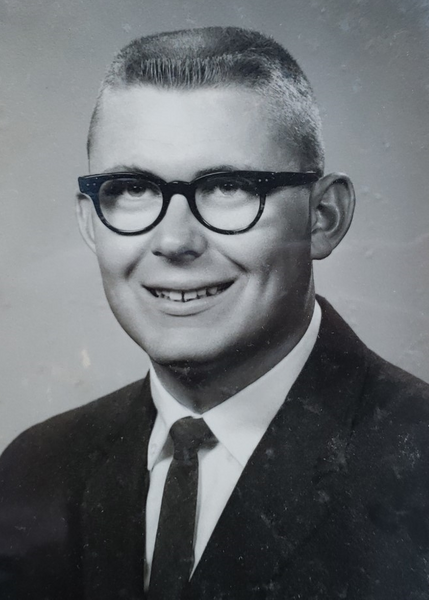 Harold Anderson, 79, passed away November 26, 2019 at Lenoir Woods.   His wife Kathleen supported him through 39 years of battling Parkinson's disease.

Harold was born in Holdrege, Nebraska on May 23, 1940 to Rev. Rudolph and Erma Anderson.  Surviving is his wife Kathleen, son Michael (Stacey) Anderson of Germantown Hills, IL, daughter Glenna (Brian Gilomen) Anderson of Chicago, IL and sister Naomi Anderson of Metamora, IL.  Harold was preceded in death by his parents and sister Beverly Kesting of Omaha NE.

Harold taught science in several northern Iowa high schools and Iowa Central Community College, before earning a PhD in Science Education from the University of Iowa.   During his PhD studies, Harold researched several summers in Oklahoma and Wyoming on a National Science Foundation grant.  Harold taught Chemistry and Physics at Stephens College from 1970 until 1993, being twice selected for Outstanding Teacher in 1985 and 1991.   He provided opportunities for his students by conducting research at the University of Missouri Research Reactor.  Harold was elected a Fellow in the Missouri Academy of Science and served as treasurer for 4 years.

During retirement, Harold was an active member of the Midwest Woodworkers Association and enjoyed making tables, turning projects and gifts for family and friends.  He also served as co-director of Columbia Audubon Society nature areas for 15 years.  Harold accompanied Kathleen in travels around the US and several foreign countries looking for unusual birds.   Harold's other passion was buying, selling and tinkering with lawn mowers and motorcycles.   He attended Wilkes Boulevard United Methodist Church and Trinity Lutheran Churches in Columbia.

A memorial service will be held 10:30am, Friday Nov 29th in the Winwood neighborhood at Lenoir Woods, 3710 S Lenoir St, Columbia, Mo with visitation 1 hour before.

In lieu of flowers, memorials may be made to The Parkinson's Foundation, Columbia Audubon Society or Lenoir Woods.
To order memorial trees or send flowers to the family in memory of Harold Anderson, please visit our flower store.