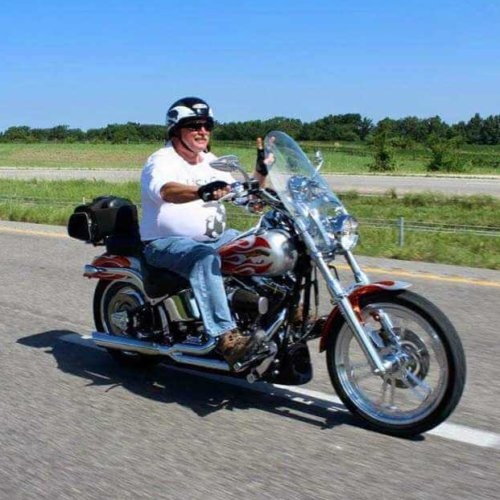 He is survived by his mother, Mary M. Hunsicker, children Christina, Matthew, and Michael Hunsicker, his sister Mary Jo Blaze (Steve Blaze), her children, and numerous aunts, uncles, and cousins. He was preceded in death by his father Richard Hunsicker.

Greg went through the St. Charles education system, graduating from St. Charles West in 1980. He attended William Jewell College for a year, then joined the United States Marine Corp. Greg was extremely proud of being a Marine and made many life-long friends there. Following his discharge, he returned to the St. Charles area where he started his career in the plastic industry. He was the Quality Control Manager for both Continental Sprayers and Production Products.

Greg played ice hockey on the first team organized in St. Charles, beginning in elementary school, and continuing through high school. He also enjoyed fishing, hunting, target practice, and riding his Harley. Shortly before his diagnosis he and a Marine buddy took a 2500 mile motorcycle ride through the Mid-West to Sturgis, SD.

Greg was diagnosed with glioblastoma, a type of brain cancer, in September of 2017. He lost a courageous and hard-fought battle to defeat this horrible disease.

Donations in Greg's memory may be made to the Semper Fi Fund by going to their website https://semperfifund.org/donate

The family would like to thank the doctors and staff of both Siteman Cancer Center and Ballwin Ridge Health & Rehabilitation for their care during Greg's illness.

Interment will be at 11:00 a.m. on April 15, 2019, at Jefferson Barracks National Cemetery in St. Louis, MO.
To order memorial trees or send flowers to the family in memory of Greg Hunsicker, please visit our flower store.