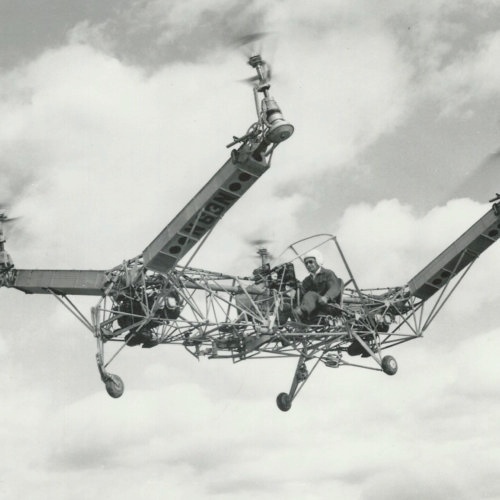 David H. Kaplan was born on July 24, 1923 to Frank and Dorothy G. Kaplan in North Chicago, Illinois, residing with his brothers Fred and Bernard in Evanston, Illinois. He graduated from Evanston Township High in 1941, then moved to New York to study at Rensselaer Polytechnic Institute, joined the army in 1942 then returned to his studies and graduated in 1947. During this time, he also served in the army reserves and spent a year studying at MIT, then earning his license in mechanical engineering with a degree in manufacturing from Brooklyn Polytechnic University.

After marriage in 1949 to Rita Kastel, David moved to begin his own company in Amityville, NY - Convertawings - developing the first patented quadrotor helicopter. He went on to employment with the US Army, worked briefly on a NASA biosatellite program and then as manager of development for Burroughs Corp. He also worked/ consulted for Fairchild, Grumman, Republic and Vertol. After a divorce and remarriage he moved to Elmira, NY and then Hurst, Texas and started working for Bell Helicopter, and later at their St. Louis, MO division until retirement.

David H. Kaplan was an engineer, an inventor, a sculptor and a writer with several patents, published materials as well as a presence at the American Helicopter Museum in West Chester, PA. He had a passion for modern art & photography and a keen sense of humor and wordplay. He was a global leader in the Humanist Secular movement that included 40+ years with the St. Louis Ethical Society.

David is survived by 4 adult children - Susan, David L, Beth and Nancy and their spouses, 6 grandchildren, and a beloved life partner Celeste Bartin and her family.
To order memorial trees or send flowers to the family in memory of David H. Kaplan, please visit our flower store.