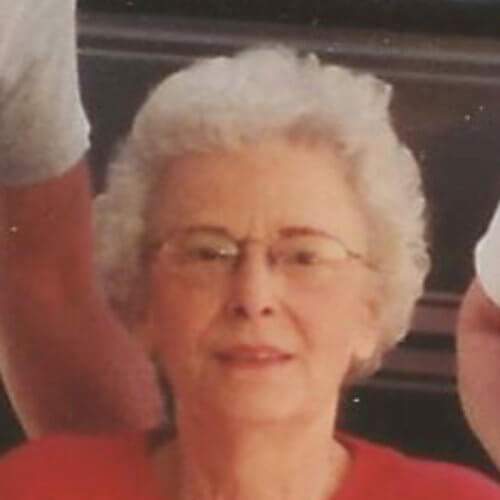 Beutonne Elaine McKean of Greenville, IL. passed away on Wednesday July 18, 2018, at the age of 87 at St. Luke’s Hospital in Chesterfield, MO.

She was born on July 15, 1931, to Edna G. (Nee: Mull) and Darrell A. Dey in Mulberry Grove, IL. She grew up in rural Mulberry Grove and graduated from Mulberry Grove High School in 1949. On September 10, 1949, she married Richard E. McKean. The couple had one son, Randall L. McKean. In October of 1950 she was stricken with polio and was hospitalized for over 7 months and was confined to a wheelchair the rest of her life. This did not stop her from living a full life. In 1960 she was named the Illinois Polio
Mother of the year. This award was given annually to one Illinois mother with polio who demonstrated that this disease did not need to handicap her life. She cared for her family as any mother did, doing the household chores from her wheelchair. She operated a small bookkeeping service for many businesses around the Mulberry Grove area for several years. She served as Treasurer for the local school district, Village Treasurer and later Village Clerk for Mulberry Grove. She was very devoted to the United Methodist Church in Mulberry Grove. She led the choir and served as Church Treasurer until January of 2018. She gained quite a reputation in the area later extending around the country as the go to person for genealogy for Bond and surrounding counties. She started in 1971 researching her own family trees and enjoyed it so much that when others would ask for help with their family, she was only to glad to help. She had spent thousands of hours helping hundreds of people research their families and was still working up until her death.

She is survived by her son Randy and wife Sondra of Greenville, two Grandsons: Tyler and wife Michelle of St. Louis, MO and Jonathan of Greenville; a Great- Grandson, Kellan McKean; a brother, Don A. Dey and wife Monika of Lehigh Acres, Fl. and several nieces and nephews. Her parents, her husband and two sisters, Rosalea Hopkins of Monticello and Barbara Gardner of Pontiac, preceded her in death.

A celebration of her life will be held on August 4, 2018, at the United Methodist Church in Mulberry Grove. A time to meet with the family will start at 10:00 and the celebration of Toni’s life will follow at approximately 11:30. In lieu of flowers, the family requests donations are made to The United Methodist Church, 116 N. Church St. Mulberry Grove, IL, 62246.
To order memorial trees or send flowers to the family in memory of Beutonne McKean, please visit our flower store.